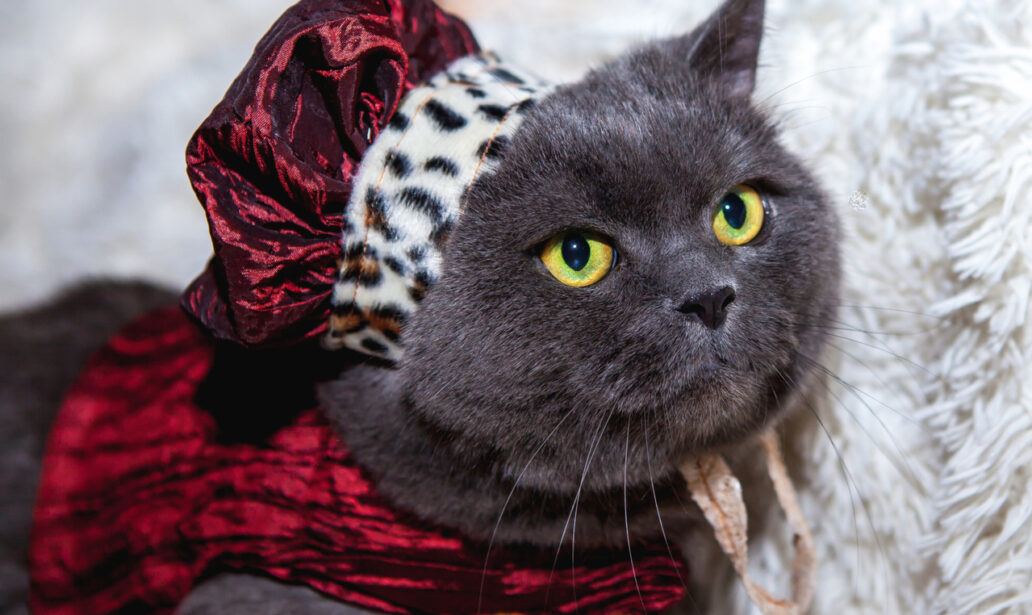 grey British cat in the hat

Cat clothing?  Why would we dress up a cat?  It’s the new thing.  Lots of cat owners are now getting into cat clothing.  So, it’s not just you.   You’re not alone in this new fad that we’re seeing all over social media.  In fact, many cat owners are jumping on the cat clothing band wagon!

I’ve mentioned dog clothing a time or two in my articles.  Now, I want to touch base on cat clothing and the current trends many cat owners are taking part of.   It used to be taboo to dress up cats.  Many cats might despise you for putting them through the ordeal or putting anything on them, including a collar.

Cats can be very finicky pets and what your cat wants, it most likely will get.   We know them.   Male cats can be a royal pain until they reach the age of 2 years old.  Female cats, well, they want what they want, when they want it.   Meaning, “Don’t pet me human until I deem you worthy.”

Anyone with cats knows exactly what I’m talking about.

So What’s With Dressing Them Up Anyway?

Social media these days is flooded with pictures of people putting their cats in costumes.   Posting hilarious pictures or videos of them walking around in their cute costumes.  Some people also post pictures of their cats wearing regular clothing.  Similar to what we see dogs wearing.

Then there’s the fluffy outfits, tutu’s, frilly skirts, shirts, cute hats, etc.   I was even one of those cat owners that attempted to dress my male cats in costumes.   Only because it was hilarious watching them walk around in whatever garb I decided to throw on him.   I always find male cats are far more forgiving than females.   My female cats would be more likely to pee on my pillow if I subjected them to what they deemed as ridiculous.

Finding the clothes can be a bit more tough than clothes for dogs.   More often than not, pet stores have clothing that is made more for dogs.   You can tell by the cut of the outfit along with the hole on the back of the shirt/coat or whatever they’re wearing.

Cats don’t typically wear collars for walking.   I would highly recommend having a collar that is a break-away collar for cats if you decide on one.   They have a tendency to go where humans can’t and the last thing you want is for your cat to get caught up somewhere and really hurt themselves.

If you take your cat for walks outside wearing the clothing you’ve bought, use a harness.  They’re more comfortable wearing a harness over a collar.  Plus, some cats are unpredictable outside.  So, play it safe.

Does Your Cat Enjoy The Clothes?

For the cat lovers out there, you know when your kitty is very unhappy with you.   You can tell just by the look in their eyes.   If they look like they want to tear your face off, then they’re pissed.  Or, if they’re simply bored and waiting for their pet human to finish humoring them self, then you’re more safe.

I’ve had more than enough cats to know when they look very angry, and I can honestly say, the females were not one to make angry.   They have a tendency to lash out at you when you least expect it and they can be very devious in how they get back at you.   Make sure that if you’re putting your cat in clothing, that your cat doesn’t hate you for it and that they at least look like they’re doing okay.

Cats are no different from dogs when it comes to the style of clothing that you can choose from.   It’s easier to find clothing online for my cats rather than trying to shop in a local store.   But if you’ve read any of my previous articles, you know that Alaska is hard to find anything for pets, no matter which breed and the items can be very spendy.

Most cats are pretty easy to shop for since the different breeds of cats are similar in size.   If you have a large Maine Coon for example, they can get to be pretty large cats versus your typical domestic cat.   You can also measure your cat, similar to how you would a dog.  Measure from their shoulders to the base of their tail will give a good idea of their length, and if you can manage to get your tape measure around their chest, than you can also gauge their chest size.

Not All Cats Are Emotionally Equal.

As mentioned before, gauge your cats reaction to the idea of clothing in the first place.  I started with something small like a handkerchief and placed it around my male cats neck and tied it very loosely and took some cute pictures of him.   While wearing this, he didn’t scratch at it, claw my eyes out, pee on my bed.   He kind of just laid there and dealt with his human being weird.

Since he seemed open to this small piece of clothing, I started putting hats on him, costumes, shirts and of course more fun collars that had little bells on them.   All in all, he was fine with me dressing him up.   My female cat was the exact opposite.  She refused to hold still long enough for me to even attempt anything on her and when I did manage it with the help of my husband, she had this look in her eyes that said when I went to sleep I was going to regret the attempt.

Knowing that I would soon regret attempting this with my female cat, of course I immediately took the item off and attempted extra love.

Never mind that she turned her tail up at me, gave me her behind instead and ran away.  I knew that she would get me back, it was simply a matter of time.  But for my male cat, Spaz, he was very lovable and any sort of attention to him was good attention.  He was very open to any outfit I threw on him and just laid there waiting for the petting to come.  Pictures on the other hand were more difficult to get since he often hid his face as soon as I attempted a picture, but I did get a few at least.

Do you dress up your cats? Comment below what works for your cat or send pictures if you have them! Thanks for reading!