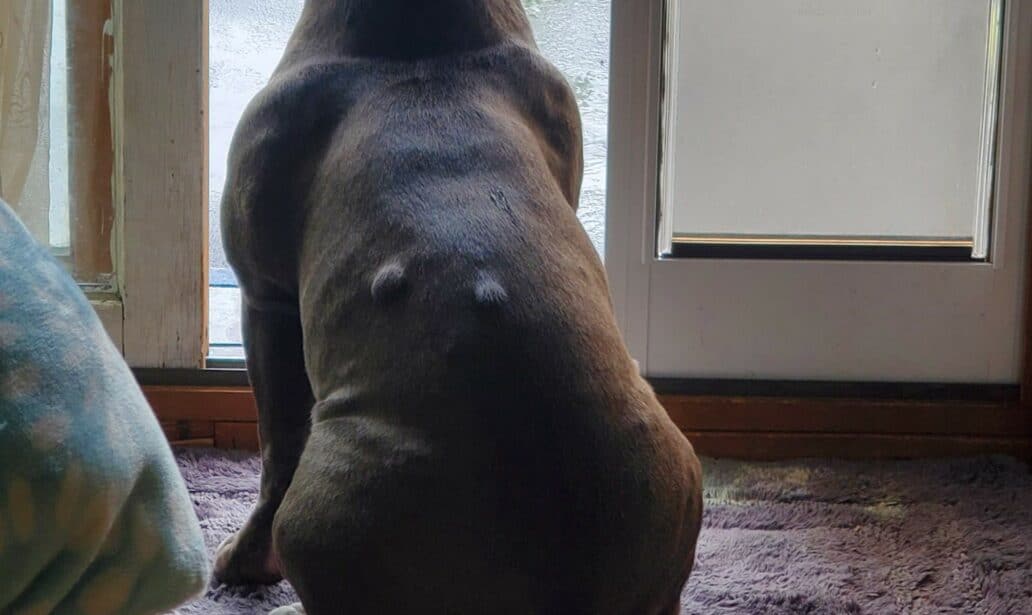 Ah, the dreaded time of summer and those lovely mosquito bites we get everywhere.   Those always itchy, trying to find a spray to help the itch go away.  Though, if you’re like me and you go the “old school” route, marking X’s all over those bumps to stop the itch.  The question I have is, do dogs get mosquito bites?

But what about our furry friends that are outside with us?   While we may have sprayed repellent all over ourselves, what do you do about your dog that’s getting swarmed too?   They need protection just as much as we do.  If not, more since they can’t swipe at them.

Dog’s Get Mosquito Bites, Too.

Our dogs aren’t quite like us when we’re getting swarmed by those nasty things.   They can sometimes not only be annoying, but they can hurt too, depending on their bite.   I’ve noticed over the years and living in several states that some bites from mosquitoes can hurt really badly.   Hawaii was one of those places.   Alaska however, the mosquitoes up here are as big as the mosquito eaters.    You can’t feel a thing when they bite you!  So, you might end up with a welt right on your nose and not even know it.

While I worry about myself, my kids and my husband when it comes to being in the woods up here, I also worry about my dogs.   Atlas gets the biggest mosquito bites I’ve ever seen on any dog.  Those nasty mosquitoes just love Atlas’ blood.  They just suck for a long time and she’s very sensitive to the bites they leave.

Dogs with short fur are a meal running in the woods just for mosquitoes.   They can’t wave their arms at the bugs to drive them away.  So, when you see their backside covered with mosquitoes, they’re getting eaten up just as we would.

I was camping this past weekend with a pack of dogs, just because all my friends have dogs like we do.   Most of the dogs had long fur which I noticed the bugs stayed away from.   Sure, they would hover over the dogs face at times.  But, they would use their paws to swipe their face or just simply run around playing.

With the two dogs that had short fur, the bugs seem to just love them.  Atlas, most of all I’m afraid.   I’m not sure what it is about my dog Atlas that the bugs seem to crave, but they swarm her within seconds of being near the woods.   She gets bit so bad that her skin starts to welt up all over her body.

For her, I needed something to help her since dogs are pretty helpless when it comes to the mosquitoes we have in Alaska.

How Bad Can They Be? 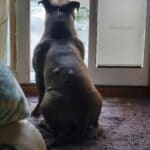 This summer is Atlas’ first summer. We live right on what’s called a bog and the mosquitoes in the bog are horrendous. They’re huge, they’re a nuisance, and they’re in swarms by the thousands during certain times. To put it in perspective, I’m going to tell a short story:

About 2 months ago, I had some lettuce that was on it’s last legs that I wasn’t using.   So to get rid of it, I decided to just leave it in the bog for the moose to eat (yes, moose love vegetation).   I walked down a very small hill in the back of my yard.   Stepping into the bog,  making it only 10 feet before the mosquitoes started swarming me.   They were so bad that my vision was black with bugs!  They pinged off of me like someone throwing bird seed at a wedding.

I was instantly getting bit all over my body within seconds.   In an attempt to win this war, I started flinging my arms around like a crazy monkey!  Jumping up and down with my legs doing a weird dance move you only see on Seinfeld and I high tailed out of there!   I looked back for a brief moment and saw the swarm following me and ran inside to sanctuary.

It’s that bad up here.   The bugs have been known to take down baby moose!   Thousands swarming and blocking airways and sucking that much blood.

So, it’s important in Alaska to protect our pets from my demise; I had to find bug spray for my dog.

There Is Bug Spray For Them.

Considering my recent dilemma with my story and with Atlas getting these huge welts all over here, I had to look and see if there was bug spray for dogs.  Deciding to just make a trek to the pet store and see what they had in stock.

Stopping at Pet Smart here in town, I asked questions, “Is there a bug spray for dogs, or should I use a children’s bug spray instead?”   I was thankful when the guy said there is a mosquito spray they make for dogs, and he showed me the way.

While this spray says it’s for ticks and fleas as well (I didn’t need that) it also stated it repelled mosquitoes – that’s what I needed! Being around $10, it wasn’t a bad price for her to be protected, so I decided to give this a try. The spray can be sprayed all over their body, and I even put some on my hand to rub around her muzzle and around her eyes, trying not to get it in her eyes.

I will say, the stuff stinks like black licorice, but it seems to do the trick. The bugs still bite her wherever I missed the spray, but it at least protect her for the most part. I will say it requires to be rubbed in to their fur in order to be effective, but once it’s rubbed in really well, she’s good to go.

Final Words on, Do Dogs Get Mosquito Bites?

At the end of the day, we always want to be protected from nasty mosquitoes; we protect our kids, our family, so let’s not forget about our furry family. They can’t exactly tell us they’re being swarmed, and they definitely can’t thrash their arms around to get them off of them, especially around their butts, so find a good spray at your local pet store if you’re going into the woods.

Most pet stores have the mosquito spray for pets, it just might also say it’s for fleas and ticks as well, but hey, everywhere out of Alaska that’s a bonus. Ticks just made it to Alaska, but they’re not prevalent yet like they are in every other state.

What’s important is that you protect all of your family when you’re out near the bugs. I know Atlas is more happy when she’s not getting eaten up, that’s for sure!

What do you use as bug spray for your pets?  Because now we know, dogs get mosquito bites, just like us!

4 thoughts on “Do Dogs Get Mosquito Bites?”