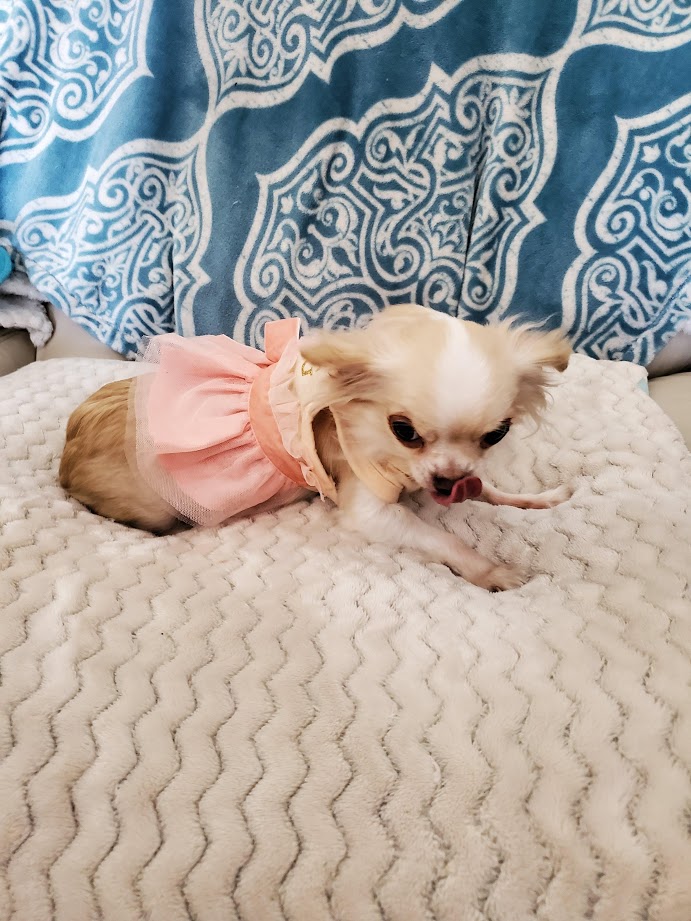 It’s been some time since I’ve posted a new article on my site here. I’ve found it’s hard to find motivation since the passing of my long time friend, Buttons. She passed at only 9 years old, and I was a wreck when it happened. No, she wasn’t put down. She didn’t die of natural causes. Unfortunately, one of my bigger dogs, Atlas, has turned food aggressive as of her last heat cycle.

This wasn’t something that I could know was happening, or even something to prepare yourself for. Just one day, Buttons was eating like any other day and next thing I know, she’s laying on the floor, dying. As most of my readers know, Buttons was my inspiration for so many articles. I loved buying clothing for her, especially the cute Tutu’s, skirts and everything else.

It’s hard when you lose a beloved pet, especially if you feel it was your negligence that cost her her life. Why do I feel I’m to blame? I don’t know, I can’t answer this. What I am thankful for, is she didn’t suffer. It was a quick death, and it was over in mere minutes. But, it was horrific to witness, and even more so to live with the dog that didn’t know she did wrong.

Atlas, to this day, isn’t aggressive until it comes to food. At 2 years old, she developed this suddenly, and even in training, seems the same as she’s always been. Her happy-go-lucky self, until the food comes out. Then, it’s top dog all of a sudden and she thinks she’s the top. Now, to take precautionary measures, I feed them all in their kennels.

As some of you might be aware, I still have one other small dog, Harry. I worry about him daily when it comes to how Atlas might react to him when the food comes out. In order to avoid another catastrophe, I ensure Atlas is in her kennel before even pulling the food tote out.

Not long after Buttons passed, even just rolling the tote out caused Atlas to attempt an attack on Harry. It was swift, just as swift as the incident with Buttons, but I was there this time, and not sitting on the couch. I was able to pull her back before something happened. The hard part? I have kids. Kids that are old enough to know to be cautious, but also not old enough to know the true consequences of neglecting to take proper cautions.

Today, Atlas got into their room and I heard a scuffle between Harry and Atlas. Jumping up and yelling out her name, I ran into the room as fast as I could. Thankfully, Harry was able to get away, but not before I thought the worst had happened again. Thankfully, he isn’t injured.

Most of you might now be thinking, get rid of the aggressive dog – you can’t trust her. Or, find a new home for the small dog. Well, he’s still here not for lack of trying out other options. My oldest daughter wanted Harry for her 15th birthday. She’s attached to that dog like I’m attached to Atlas and Muse. But, with a new baby, she can’t take him. She tried.

I can’t get rid of Atlas, she would be put down for seeming aggressive, when in fact she’s not, unless there’s food involved. So, all three continue to live with me, but this doesn’t come without stress. Stress that something will happen. And that if it does, did I really do everything to prevent injuries? Well, I’m sure trying.

Feeding separately, careful to not drop food and teach the big dogs to “Leave it” when I do and pick it up quickly. Keeping them away from the food prep area period as well. Kenneling them all before their food even comes out. Picking bowls up immediately after feeding them. No bowls, means no left over food.

It is a lot, but they all still mean the world to me. And, I will say, even with the incident of losing my Buttons, I still love and cherish Atlas. Most ask how can I love her if she’s aggressive? But, I will say, it was an accident. There was no shaking, there was no continued attack on Buttons after the fact. It was one snap, one bite that did it. That was the end and that was all it took. A 60lbs dog to a 2.5lbs dog. She simply didn’t stand a chance.

However, to this day, it’s still hard to find motivation to write about precious clothing, or accessories. This site was created because of the inspiration Buttons had on so many. Her adorable cuteness in all her costumes and cute clothes.

She is missed and I think of her all the time. Precious Buttons, you are missed.