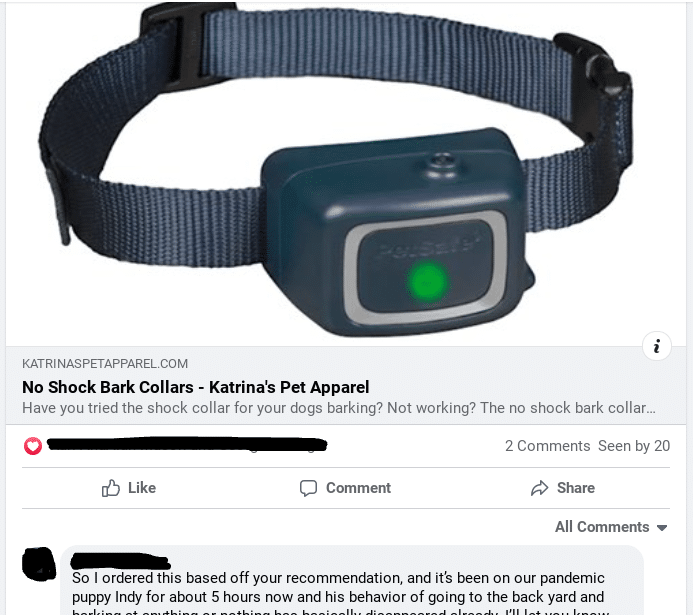 Her Review on FB

I recently had a comment to one of my articles on FB. A friend of mine had ordered one of the items that I had recommended. I didn’t know that she had even ordered it until about 2 weeks ago. Dogs that bark non-stop can be a real pain in the rear. And, out of the many no bark collars for dogs, I had found one that doesn’t shock them!

Yes, I know, some people still swear by shock collars. However, I’m not one of them. In my younger years, when I was full of booze, I decided to try one. Let me tell you, it hurt like a real bi$@!. It was not fun. I knew that my dog spazzed out from it, but I didn’t know that it hurt as bad as it did! Imagine, your poor dog just doing their job, barking to alert you to something and zap! Next thing you know, they’re necks are spazzing out from the shock delivered.

So, one day when I had a few too many drinks, I decided that I wanted to see how bad it was.

Now, you’ve all seen those people on YouTube that are, um, smart enough to try the shock collars out, right? Thank God, there was no video of me doing this nonsense! Anyway, I wanted to see just how painful it was to my dog, Annie, long ago. So, lots of Vodka later, the collar barely touching my neck. I even had it on one of the lower settings of course, and bam! Pain all up through my neck, instant headache! 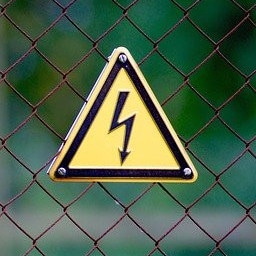 I ended up throwing the thing into the corner and yelling like a man. I sat thereafter, pondering where my life went wrong. It was probably the Vodka speaking and the pain up my neck. But, I did wonder why I put that on my dog. I mean, sure, they have fur and stuff to kind of muffle the shock, but not enough. Plus, she was a short furred dog.

It wasn’t long after this that I threw it away.

People might think that dogs are impervious to pain, but they’re not. They feel pain the exact same way we do. Physical pain, and emotional pain. Your dog might forgive you for being a real terd one minute after you hit them, but that’s their all-devoted love for you. Which is admirable on so many levels. If you hit me, I’d hit you right back. And, probably hold a grudge for the next century.

But, the shock collars actually really hurt your dogs. Now, if you have a Tibetan Mastiff, with fluff coming out of every pore on your dog, then the shock might not reach their skin. But good luck to whoever is brave enough to shock one of those dogs! Nope. That dog can eat you as if you’re nothing more than a meatball.

However, Annie was a short furred dog. That means, she felt the shock just as much as I did. And I immediately regretted putting that thing on her. It wasn’t for barking, she actually was really good about that. It was for jumping on people. I tried everything for that, and nothing worked. Until I found a rolled up newspaper, or any loud paper for that matter. That worked like a charm!

I found a spray bark collar that emits a spray every time your dog barks. Now, I post a lot of crap on social media. I’m actually surprised that my friends even read my articles, because I post every day, practically. But, there’s one out there that tried one of my recommendations! Woohoo!

She said that she had ordered this no bark collar for her new puppy that was barking nonstop. Now, some dogs are vocal. I have a friend just a few houses down, and her dog barks nonstop! Like, nonstop! “Dammit Lena, No Bark!” Now, this friend didn’t know that there are no bark collars. So, it inspired me to write about them.

Not the friend down the way, the other friend that lives in town, but it’s so far it might as well be another city unto itself. Anyway, she ordered this collar and said it was working like a charm! She said that within hours, it’s stopped his insistent barking! Hours people! Hours!

How No Bark Collars for Dogs Work – The Spray Kind.

The thing that I like about no bark collars for dogs, when you buy the right one, is they emit a spray. Usually, the spray is something your dog doesn’t like. Or, it simply stuns the crap out of them. What happens when you’re stunned in the middle of a sentence? You lose your train of thought. I’m not exactly in the dog’s brain to know which of the two is more accurate.

But, I’m going to wager that it emits a spray they don’t like. Citronella, lemon or some other strong scent. See, dog’s noses are very sensitive. Unlike ours! My children have yet to smell the funk that emits from their room. Maybe I should patent 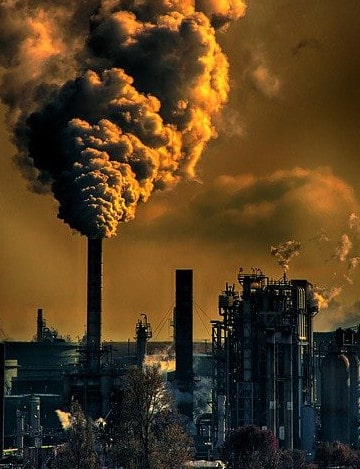 that smell for no bark collars.

Anyway, the smell is usually a citrus smell. Something strong, and pungent. When they bark, the collar sprays this right into their face! Bam! No bark! It doesn’t hurt them at all. If I used the smell from my kids room though, I can’t guarantee they wouldn’t fall over and turn green. It’s pretty bad at times. Love my kids!

Now, I do want to point out – if you have a dog that barks like ol’ Lena above, you might want to order some refills with the collar. Just in case! She’s a talkative one, that one.

Final Thoughts on No Bark Collars for Dogs.

I love when I write about something, and I get an actual review from someone else. I know what works for my dogs, but thankfully, they’re not talkative. That would be Harry. He’s a Chihuahua, that should explain it all right there. As for my other customers though, it’s nice hearing back what someone thought. We don’t always know what people are thinking when they buy something.

More often than not, we get the negative feedback. I’m still waiting for the day when someone says, “Man, you’re weird in your writing! You always have stories! Ugh.” Yes, yes I do. In my old age as a grandmother, that’s right, a grandmother, I have stories. Besides, I kind of pay attention to the world around me to tell the tale. Not like my kids…. They’re glued to their phones. I swear, it’s like watching a glowing light form on their faces – their phones are that close! I want to scream, “You’re going to go blind!”

Besides, it’s easy to relate life to the circumstances you’ve lived through. And, I’ve lived through a lot with my dogs. I want to share the good with the bad for everyone. I know I’m not the only one suffering through some of their nuances! Like, barking at nothing, all night long! Like my neighbors dogs during the day. Gawd. They’re annoying to say the least.

So, if you have a talker, try this collar out. You won’t be disappointed and at least one other person swears by it! Yay!

4 thoughts on “No Bark Collars For Dogs – Only The Best!”