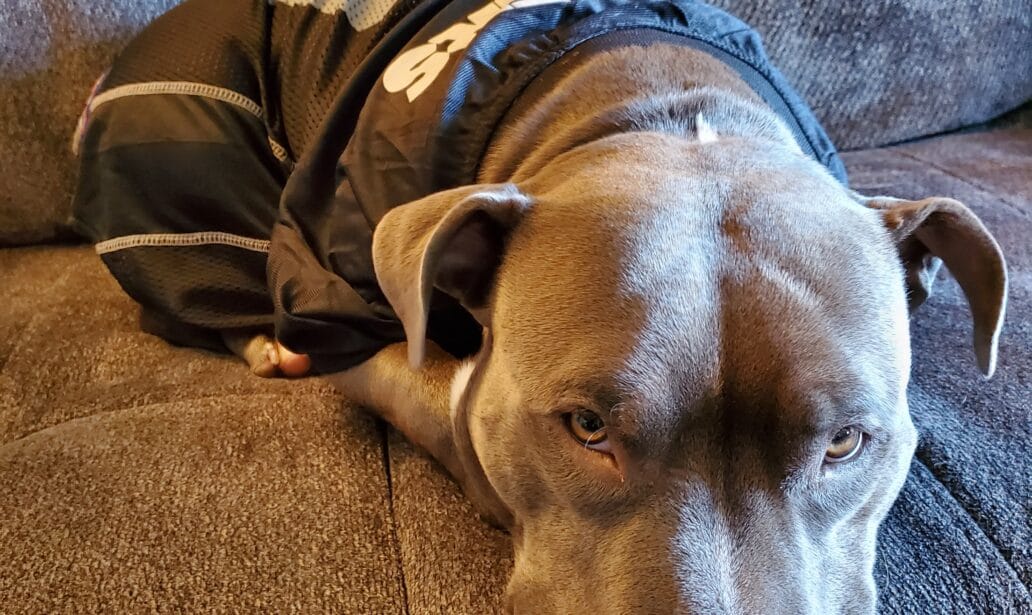 Why I got the The Fi dog collar is a long story of how I lost Atlas last year. The Fi Dog Collar new innovative collar that not only tracks your dog via GPS, but also their activity levels.  I recently joined the world of Fi because last year, Atlas was lost.  While she was only lost for 25 minutes, those 25 minutes were the longest of my life.  I didn’t have a dog tracker last year when this happened.  So, she was lost in downtown Anchorage, while I ran around screaming for her to find her.

Now, our downtown isn’t nearly as large as others that I’ve lived near, but she was still lost.  The only reason I was able to find her so quickly, was because I yelled at every single person I saw, “Have you seen a gray dog?”

How Atlas got Lost.

My story isn’t the most crazy, or entertaining, but it’s scary to me nonetheless.  This year, I’m prepared in the event she gets out again.  Dogs, getting loose in Alaska, don’t always survive I’m afraid.  I was lucky with Atlas, I will say.

She was at her dog trainers that day.  I drop her and Muse off twice per week for 8 hours of exercise and training.  It was a pretty sunny and hot dog, so the trainer cracked her large garage door while she was training Atlas and one other dog.  They were fine for a while she said, until something spooked them.  Then, all of a sudden, Atlas squeezes her big ol’ booty under a 3 inch space and gets out.

The other dog, of course, followed Atlas and decided to go running too.  The trainer said that Atlas got to one of the cross roads and decided to just sit on the sidewalk, maybe for a rest, I’m not sure.  But as she approached Atlas, she said she took off across a 4-lane roadway.

It didn’t take me but 2 minutes to tell my ex-employer, “I have to go, my dog got out.”  Of course, they didn’t like that much, but hence the reason of ‘ex-employer’ there.  I get to the dog trainers and hear the story, but briefly.  I ran through the alleyway adjacent from her training room, but I didn’t know I was going in the opposite direction.  This is where the Fi Dog Collar would come in handy here!

I started asking everyone I saw, “Have a you seen a really buff gray dog recently?”  I’m sure I looked like I lost a child (Atlas is a child to me of course).  Because of everyone I asked, they decided to hop in their cars, get my number and drive around helping.

Soon after this, I heard that someone saw Atlas running in the opposite direction.  Towards the main downtown area.  So, I ran.  I ran as fast as I could, fluffy and out of shape of course.  Wearing, of course, not the best shoes to be running downtown Anchorage in.  It didn’t matter.  All I could think of was Atlas feeling helpless, scared, hurt, every imaginable, horrible thing possible.

I must’ve ran at least 2 miles looking, screaming, yelling for Atlas.  Every person that saw me hoofing it down 9th Ave stopped to ask what was wrong.  I told them, “My dog is lost!  She’s thick and gray.  Please help!”  As I saw people as I’m yelling at people in cars point in directions they saw her.  I heard people yell at me that they saw her running the same direction I was going.

I didn’t care that I was in the middle of the road, I just needed to find her.

Now let me interject for a moment.  I now have the Fi Dog Collar and the GPS is pretty darn accurate.  Within 10 feet accurate.  I hear some people complain that this is terrible.  But what’s more terrible, is when you’re running several miles, down 30 blocks of roadway and you have no idea if you’re even running in the right direction.  That’s terrible.  So 10 feet?  Yeah, I’ll take your 10 feet!

It wasn’t long after I screamed at people that two ladies told me they saw her run into the cemetery.  Thank God people were listening!  One lady, bless her, was following Atlas because she said she looked so scared.  Here I am, running into the graveyard, saying sorry as I’m hoofing over graves, and yes, I said sorry a lot!  “Sorry, sorry, sorry, sorry, on and on.”  Then I hear someone yell, “She’s over here!”

I don’t know the last time I was able to get my old ass to run so fast and in the worst shoes possible.  But believe me when I tell you, my husband could hear me over the phone breathing hard from being inside my pants pocket.  And there, I saw Atlas, 50 or more feet away.  She was darting along the fence, watching the other 2 people come closer, looking like a caged animal.

I had never seen her look so scared in my life,  I saw her debate which direction to run from these people.  That’s when I yelled as loud as I could, “Atlas!”  She didn’t register it was me.  I tried again, “Atlas, Baby, Atlas!”

She started to try to run, thankfully she was fenced in on 2 sides, so she had no other option but to run in my direction.  Unfortunately, she was running towards me, and then looked like she was going to cut another direction.  That’s when I called again, “Who’s my Atlas?”  As loud and as squeaky as I could, cause let’s face it, when your giving your dog cuddle love, your voice tends to get high and squeaky.  And apparently it worked, because she stopped and looked at me.

Her head tilted to the side, and I said it again.  She ran so fast towards me that I thought she was going to barrel right through me.  Which, if I wasn’t expecting it, she would have.  I’ve never seen her so excited to see me in my life.

Yes, She Got Hurt.

As I’m checking her over, I realized she had blood all over her.  Her toes, her mouth, her leg was swollen.  One of the ladies, my favorite person in the world that day, said she had been following Atlas for some time.  Watched her run across the road and get hit by a truck.  This is why I said earlier, most dogs that get lost in Alaska don’t make it.

She said that Atlas getting hit tore her muzzle right off her head.  Yes, her muzzle was dragging under her as she was running through the cemetery.  And to get this thing off must’ve take quite a hit, because she muzzles hook around the head and to the collar in two places.

Thankfully, my husband was close with the truck, because I neglected to say in the beginning, that I had started out in my car.  That didn’t last long, because you can’t go through alley’s and yards in a car.  And definitely not a cemetery.

We found our baby, running through hell.  Had I had a GPS at the time, I would’ve been able to pull it right up, and track her down easily.

We took her to the ER, got her X-rayed and checked out to be sure she as okay.  I didn’t even mind the $1600 bill because I have pet insurance, so 70% is covered.  Not that it mattered, I just wanted her to be okay.  She had minor injuries, one of them was a swollen left side where she was injured.  Blunt force trauma the vet said, so most likely the truck that hit her.

She got her pain meds, and some fluids.  The vet said to let her rest for at least 2 weeks; no running, no activity.  Today, she’s fine, so I’m thankful.  And of course, if it happens again, I now have a system that gives me an address of where she is in live time.  It also shows where I’m at and if I’m headed in the right direction.

But more on the Fi Dog Collar next time and how you can get one.  Stay tuned for the actual details on that!  I wanted to first give my reasons for needing the collar in the first place.  The story of the why is the most important.  Don’t you agree?

12 thoughts on “Why I Got The Fi Dog Collar”