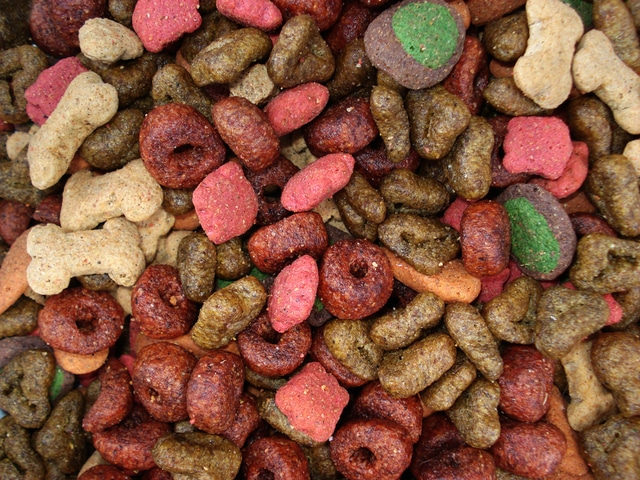 Last night, I was scrolling through Facebook and came across some pictures that were really disturbing to say the least. I was reading about a particular dog food that was causing dogs to have internal bleeding.  It was also causing blockages in their intestines because of a buildup of blood.

It started this whole search for me that led to hours of research on what dog food is made of.   How do you know the difference between the good dog food versus the bad? I should first explain dog food basics.  Then, on to ingredients to watch out for.  Last, which foods are actually okay?

Everyone with dogs know that dog food is a necessity for our dogs.  Why?  Well, they have to eat, right?  Not only that, but each dog food contains different nutrients.  Dogs, like humans, need vitamins and minerals to be healthy.  People with a diet that consists of processed foods usually take vitamins.  Feeling tired as a woman?  Maybe you’re low on iron.  Feeling bloated?  Maybe you need probiotics.  A whole list of reasons as to why people take vitamins as supplements.

Dogs can’t tell us, “Hey, I’m feeling like I need a multi-vitamin, Mom.” So, we feed them what the vets recommend.  Or, what we can afford.

The downside to this?  Because dog food is chemically made, there can be certain chemicals inside dog food that is hazardous for their health.  In looking at the ingredients last night, there are chemicals in food that the FDA deems okay for dogs and even humans to ingest in certain quantities.   Did you know that one of these chemicals is actually found in antifreeze?

In my search, I found that there are a TON of dog foods that contain chemicals that cause health problems.   Heart failure, kidney failure, liver failure, intestinal bleeding, stomach hemorrhaging, as well as bleeding in the stomach, among a lot of other health problems.

Vets have even said not to use certain dog foods because there are current lawsuits against these companies.   Some have caused dog’s health to suddenly deteriorate over the course of just a few weeks.  Deaths have even occurred (I was instructed by my vet to avoid 10 different dog foods and many of these are on the “safe list” in numerous websites).

Before getting into the chemicals, here’s a short video from another perspective.

So What Are These Bad Chemicals?

Yet More To Go

Reading about these chemicals in dogs food, I saw that a lot of companies have had serious complaints issued against them.   Some from dog owners whose dogs have died from ingesting these foods long term.  When they take the pets to the vet, the blood work has come back with results that show serious chemicals in their blood that has cause their livers and/or kidneys to shut down.

Several lawsuits have been filed against some companies.  Some of the companies simply state that they’re sorry for the dogs loss of life.  The chemicals placed in the foods are FDA approved.

However, some chemicals listed above are only safe in extremely limited quantities. Who’s to say that they don’t overuse these products for the dog food simply to create MORE food to make MORE money?

What Are Other Options? Safe Options?

Honestly, my research is ongoing.  I looked into every possible dog food last night until about 3 am when I still couldn’t find a single dog food that hasn’t caused health problems or been recalled at some point in time.  Even the so called “organic foods” have harmful chemicals in them.  I looked up natural foods for dogs and found ingredients in them that included the dyes listed above.

It was almost as if every single dog food made has something in it that’s bad for my dogs.   I don’t want to spend the rest of my life feeding my dogs known carcinogens.  Or, chemicals that can cause internal bleeding, or other health concerns that can cause them pain.

As Humans, We Have A Choice.

As a human, we make the choice to shop for chemically processed foods when we grocery shop.   We know that chips are bad for us, yet we buy them.   We know that Kraft Mac & Cheese is bad for us, yet people buy it.   Dogs on the other hand can’t make that choice.  They’re simply eating what we put in front of them and when they get sick, it’s our fault for not doing our research.

I looked into the “raw diet” as well for dogs.  This means feeding them meat, eggs, apples, vegetables, and other items that are safe for dogs consumption. I’ve even thought about whether this is a good option.  But then I think about when we’re out camping.  Is it feasible to bring along food that I’ve made for 3 dogs while away for 5 days?  Or can I count on myself to make the food ahead of time for them so that one night should I fall ill, they’ll be able to eat?

All in all, I’m still looking folks.   I’m looking for a dog food that is natural, not artificial, not only online, but available here in my city.  I also need foods that haven’t had lawsuits against them for causing heart problems, or other organ damage.   I found a food called “Wellness” that is sold in pet stores.  But my research isn’t conclusive yet to determine whether this is a safe option for my dogs.

I will continue with my search and write another article soon once I’m finished.  Once I have determined it’s a safe food as well as whether my dogs will even eat it.  That’s the kicker!   Will they eat it and not get sick?

I also recently wrote an article about treats – which ones are good versus bad; click this link to view more.

Stay tuned for my final results when I have them!   Thanks for reading.