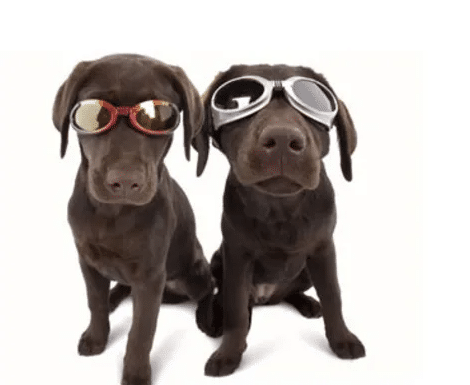 There’s a new trend that’s just come up recently with pets. Dog goggles. Or, as some call them, Doggles! You might be wondering, why dog goggles? Well, why do we wear sunglasses? Being in the Sun can have harmful effects on our eyes. We know this. I know right now, most of the US is buried in snow.

However, summer is just around the corner. Now’s the time to think about getting sunglasses for the summer coming!

With the bright, gleaming sun above us, this can have a major impact on our eyes. Our dogs too. We know that UV Rays can be harmful to our eyesight. I mean, who likes to stand in that bright, bright, Sun and squint the whole time?

Just stand outside after being inside, and look at a white car. Ouch! Too bright!

So, what about our dogs? Why do we protect our eyes, but not theirs? Aren’t theirs just as important?

Dogs are part of the family for many dog owners. We see our dogs as an extension of the kids, or the family. I know that when I take my kids outside, they wear sunglasses. Why? The bright Sun hurts their eyes. After long periods of time in the UV rays, they can harm our eyes more than we know.

It’s like the old saying, “Don’t look at the Sun or you’ll go blind.” And, what do we do? We look at it. Then you see this big, bright, yellow thing in your vision wherever you look.

Dogs don’t know not to look at the sun. So, they do. And their eyes can get damaged because of it. Early cataracts, blindness, and cancers. UV Rays affect the eyes in so many ways. Diseases like and Pannus. Pannus is basically a layer of tissue that forms over other tissues. And, it can develop in the eyes. Dogs can be prone to this after long exposure to the Sun’s UV rays.

When dogs eyesight starts to fail, they can become frantic too. They simply don’t understand what’s happening to them.

Dogs eyesight isn’t far off from what ours is. They see some colors, they see images. My dog even watches TV. That’s right! She watches TV. So, if I were taking a day with the family at the beach, my dog will be there with us. And with that harsh Sun gleaming down on the sand? I’m going to make sure to protect my dogs from this harsh light.

What about windy days? Sand blowing right in your eyes? Hurts, doesn’t it? Do we honestly think it doesn’t hurt our dogs as well? Of course it does! They can’t say, “Ow, something’s in my eye.” They will sit there and blink rapidly though, trying to get the debris out.

In the summers in Alaska, we have a Sun that doesn’t like to set. That means, we are subjected to UV rays more than the states during our summer months. When we go to the lake in the summers and we’re sitting on a boat, those UV rays are bouncing off the water’s surface.

I recall a few years back, my dog Annie starting losing her sight. She was sitting on one of the couches on the boat and kept squinting her eyes. When I noticed that the sun was shining directly in them, I went over and blocked the Sun. She was instantly happy and wagging her tail. Had I simply had dog goggles for her, she would have been fine.  So, this year they’ll have life vests and Doggles!

Some are even prescription!

As dogs age, they start to lose their sight just like we do. For dogs though, it can be confusing when they can no longer see very well. Annie, as she started to go blind, would panic at times when she could hear us, but couldn’t see us. There wasn’t much I was able to do for her though, because I didn’t know about dog goggles.

For the prescription glasses, they’re often referred to as Doggles. Mainly because that’s the name of the company that makes dog prescription eye wear. They’re made especially for dogs with failing eyesight, or if they’re just blind.

You can purchase sun glasses, blackout glasses or prescription. The blackout glasses are to help dogs rely less on eyesight, and more on scents and sounds. They also help block out harsh light that can cause dogs discomfort once they start losing their eyesight.  There was a great article published in 2004 by ABC News on Doggles.  Good read!

Now that you know there are dog goggles, and even Doggles, where can you buy these things?

Where To Buy Dog Goggles?

Dog goggles are actually everywhere now. I’ve found a few retailers that have quite a few options that aren’t overly spendy. We want dog goggles that will range around the same as for humans, right? I know that when I buy a cheap pair of sunglasses, they break easily. The last thing I want is for my dog to only be able to wear them one summer.

We know that I’m a woman of quality! I always buy quality over quantity. So, I found some good ones on BNY. As you might know, it’s my favorite dog shop!

I have never ordered something from them that I didn’t love! So, this is where I’m getting my dog goggles from. I plan on ordering a pair for Atlas tonight, and I’m debating on the smaller dogs. Remember, Harry hates any clothing. So, while it’s for his own good, he might chew them up.

I also found some on Petco’s website. They’re not as expensive as BNY, but there is only one kind to choose from. Not the best in selection. However, they have them online as well. They’re just out of stock right now.

Hopefully now you know that dogs need protection from the Sun like we do. Long hours outside can cause havoc on our eyesight. Don’t believe me? Stand outside in the brightest time of the day. Then, after a while, walk inside your darker home. It’s very hard to see after that long exposure.

Regardless, I’m protecting my dogs eyes. On the water, a day at the park. Whatever the event being outside, I want my dogs to feel comfortable the same as us. My dogs also shouldn’t have to deal with debris flying in their eyes and causing them pain. Or the Sun’s harsh rays making them go blind prematurely.

So, get online and get your dogs a pair of dog goggles or Doggles. They’ll be much healthier and they’ll love their new doggles!