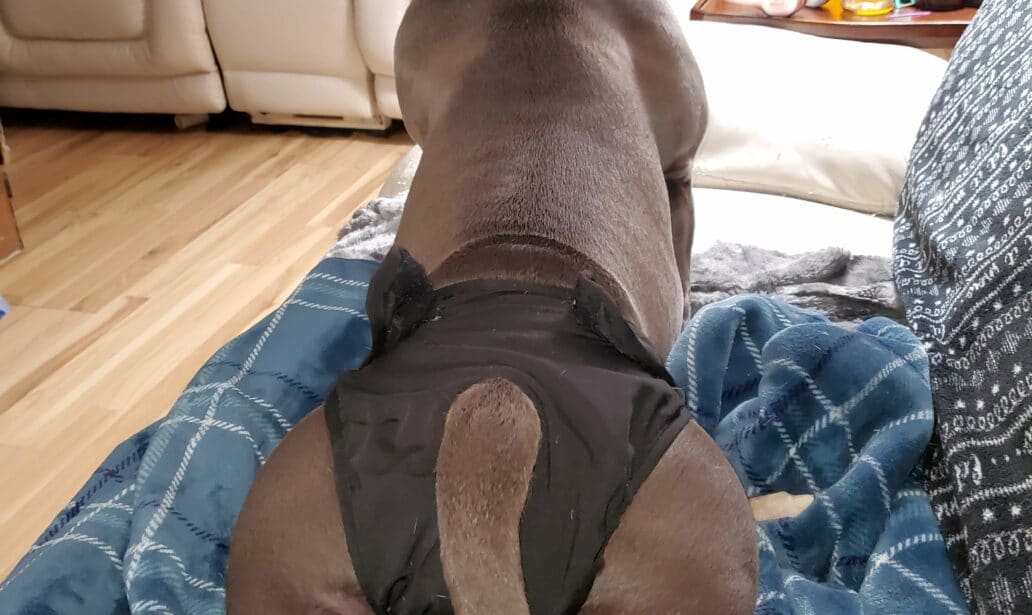 Female dogs  in heat all differ, just like humans do.  It’s a natural occurrence for all female dogs to go through this heat cycle and it’s also important to know that they’re all different.  Women who get their periods have different cycles; some women go 20 days between, some 28, others more than that.

I have three dogs and of these three dogs, two are females that aren’t fixed. One dog is a 2.5 lbs Chihuahua whose heat cycle only happens once a year.   My other dog is a 50 lbs Pocket Bully who I thought would go every 6 months, but today a surprise visited us.  So how do you know when it starts?

When a female dog is about to start her heat cycle, her vulva starts to enlarge.   Sometimes a white milky substance might even leak out.   She also might start to feel sluggish or lethargic a few days before.   With one of my female dogs, she also gets overly protective a few days before she starts, so you might notice that as well with their behavior.

All of this is normal.  Every dog is different of course, so you might notice other changes in her demeanor that I haven’t mentioned.  These are simply some behaviors that I’ve experienced having several female dogs over the course of my life and observing how they act prior to heat.

How To Know Your Dogs In Heat.

As mentioned above, there are certain traits your dog will start to exhibit before she’s in heat, but during her cycle is different. The vulva will be quite enlarged and will also leak blood during the heat cycle. All dogs are different in their flow amount of course. The bigger the dog, the larger the mess.

For my very small Chihuahua, you barely notice tiny little orange spots where she’s laying or slept. My larger dog on the other hand, you definitely know when she’s in heat and bleeding since she leaves puddles in her wake. This morning was a perfect example of her being in heat and me not expecting it.

I anticipated that she would go into her heat cycle every 6 months based on her breed and her weight. My Chihuahua goes into heat once a year, but Atlas – well, apparently it’s every 4 months now. I was expecting her next heat cycle to be in October since she had her first heat in March. I even had it set in my phone so that I could be prepared.

Unfortunately, her vulva started to swell just two days ago and this morning, I woke up to blood all over my bed spread. After thoroughly searching her for signs of injury, I realized that she wasn’t injured, but rather she was leaking from her vulva. Still being prepared from her first heat, I had exactly what I needed for her.

What You Should Do During This Time For Her.

Now that your dog is in heat, what are some things that you need to do for her to make her more comfortable? Ensuring that they have adequate rest is very important. Many dogs get very lethargic during this time, so be sure that they get the naps they need and they’re not subjected to being forced to stay awake for long periods.

A comfortable place to lay is also important for them to rest. My large dog takes a lot of naps while she’s in her heat cycle, so I recognize when I’m forcing her to do too much, like long car rides. I try to limit the long trips when she’s in heat. I also make sure to have protection at all times to prevent leaks.

How To Prevent Possible Leaking In Your Home.

Preventing leaking is important, especially from your furniture and carpet if you have it. Personally, I make sure to have at least two dog diapers on hand at all times and I purchase feminine pads at the grocery store to place inside them. This keeps the diapers as clean as possible and the pads are simply disposed of.

I state having two diapers on hand, because there are times when I’m not fast enough to pull the diaper off of her before she runs out the dog door and squats. Unfortunately for me, once this happens, the diaper requires cleaning and I hang them to dry. Generally speaking, two is usually sufficient, but I did just buy 2 more today.

The heat cycle is a temporary inconvenience for us humans, I get it. I have to run after my dog usually during the day in an attempt to get her diaper off of her in time for her to run out the door. In the winter it was easier because I blocked the dog door and was able to monitor her more closely, but during the summer my doors are often open due to the heat we experience in Alaska with no air conditioning. Catching her before she runs out the door can be a game inside my own head. Who wins?

I remind myself often that her heat is a natural part of my dog’s life and usually she’s done within a few weeks to a month. My small Chihuahua is very easy since her heat cycle lasts about a week annually and then she’s done. My large dog though – not so easy.

So if you’ve decided not to spade your female, for whatever reason, there are minor inconveniences that you will experience during this time, but just remember, it’s temporary.

Dogs in heat, they’re all different, but we can try to help them through it as much as possible by being observant and vigilant that their health is in our hands and our hearts. Take care of her during this time as much as possible and give her lots of love.

My dogs have always had extra special attention while they’re uncomfortable, and it shows. They’re very happy dogs!

What best practices do you do during your female’s difficult time? Comment below so others can hear about your experiences!

2 thoughts on “Dogs In Heat – They’re All Different”