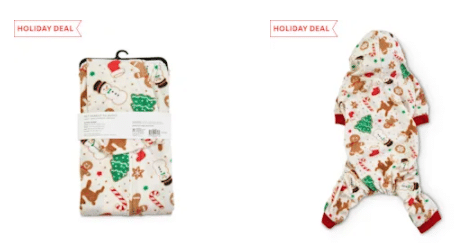 I have been in stores lately getting ready for Christmas.  In many stores, I’ve seen matching pajama sets for dogs and owners.  I’ve realized this is a great gift for everyone with dogs!  Everywhere I go, I see the matching pajama sets. WalMart has them.  Petco has them.  Pretty much any store that sells pajamas has them right now.  I’m pretty sure I even saw them at Target.

Recently, I posted an article about the best gifts of 2020 to give your dogs.  I touched briefly on the pajamas, but I didn’t go into detail.  Well, now I will and you’ll love them as much as I do!

[Affiliate Disclosure: This post may contain affiliate links which means I may earn a small commission if you purchase anything through one of the links. However, this will not affect what you pay!]

Pajamas for Dogs and Humans?

I know, it seems silly to think of dogs matching their human’s. But, it’s a trend and I’ve been seeing it everywhere I look. Honestly, on Pinterest, Facebook, Instagram. All these social media sites are showing pictures of dogs wearing PJ’s and they are cute!

I know, some people will say, “Why does a dog need pajamas?” I actually did an article not long ago about the benefits of dogs in PJ’s. It makes sense in some ways. Other ways, it’s just cute and fun.

The fact that retailers are coming out with matching sets for both the owners and the dogs is actually nice. Especially if you want to just lounge around with your best friend. Last night, I was cuddled up with Atlas most of the night. Had she been in PJ’s, she would have been warm. Why?

Why Pajamas for Dogs?

In Alaska, we’re at the negatives right now. Running water to keep our pipes from freezing. The dogs have all been cuddled up while it’s this cold.

So, as I mentioned, it’s cold up here so I can see why dogs would want to wear PJ’s. Instead of having to have extra blankets all over the house, PJ’s would help during this cold spell.

Besides, what a cute picture idea, especially for Holiday cards. At WalMart, they had a bin advertising an entire family in matching PJ’s. The kids, the adults and the dog. I stopped and was awestruck that they had this in the middle of the aisle. Of course, I asked my husband if he would sport the PJ’s with me…. Not so much.

What about your friends that love their dogs?

What Will People Think of this Gift?

I would totally wear a matching set with my dog. In fact, some are on order, but I got mine from a different retailer. I have a lot of friends with dogs and when I ask them their thoughts, they think it’s a great idea. So I imagine, people that dress their dogs up would like this as a gift.

Maybe you just buy them yourself? That’s an option. I’m not waiting on this as a gift, personally. I usually buy things that strike me as fun or needed. The PJ’s aren’t a necessity, but it will help my furry friends out right now. It’s just too cold to do anything and they’ve been lazy.

Dogs are like people when it’s very cold outside. They don’t want to be out there in this weather. I can’t blame them. Would you want to stand outside freezing doing your business? Naked and shoeless? Probably not.

I know my dogs like clothes, so they would love these. Just the simple fact that they would have some protection being outside at night. I wouldn’t let my dogs sleep in these. I don’t let my dogs wear clothes at night. It rubs their fur off of them. Their skin needs to breath, so clothing at night isn’t the best idea.

As far as dogs liking them, dogs that like clothing don’t really care what it looks it. Dogs aren’t exactly fashionista’s like we are. I like to coordinate my outfits with my shoes. Dog’s don’t look at clothes and say, “That so does not match my eyes.” My dogs like clothing because to them, it means we’re going out. Atlas will run to the room when I pull her tote out that has her sweaters in it.

She sniffs at whatever I pull out as a way of saying, “I’m going with Mom.” She’s excited to go anywhere I go. If I put her in PJ’s, I’d imagine she would be just as excited. Not to lounge around, she does that already. But to stay a little more warm to do her business outdoors.

Final Thoughts on Matching Pajama Sets for Dogs and Owners.

Most retailers are the same as far as cost goes. WalMart was about $14.99 for the dogs if I recall right. Owners would be about $20 for theirs. The kids, I think we’re around the $15 cost as well. I just thought of something – even if you don’t have a dog, you can still get these PJ’s for the family!

Petco was around the same cost as well, and so was BNY. Though, BNY did not have the human’s version. I was wrong about that. Only PJ’s for the dogs. So, Target, WalMart and Petco. Those would be the places to shop for these.

I asked my kids about having matching PJ’s with Atlas, and they thought that was the coolest thing. Any kid would be excited to have the same PJ’s as their dog. Let’s face it, kids love their dogs. I couldn’t imagine life growing up without a family dog. Besides, the dog cleaned up the mess the kids made at every dinner.

This Christmas, give the gift that says you’re thinking of the whole family. Don’t neglect the dog in their life. Even if you don’t have a dog, if your friend does, they would love anything you gift them.

What are your thoughts on the Matching Pajama sets for dogs and owners? Would you wear them?

4 thoughts on “Matching Pajama Sets for Dogs and Owners”