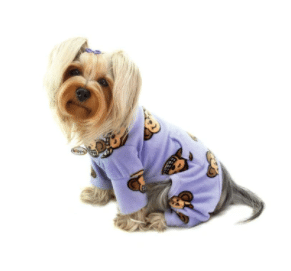 I was recently at Petco this weekend, and I noticed that dog pajamas were everywhere.  I’ve never bought dog pajamas in the past for myself.  I actually often look at them and wonder why we would put our dogs in PJ’s period.

I would imagine that because I live in a cold climate, maybe people put their dogs in pajamas to keep them warm at night?  Let’s talk about the pro’s and con’s together I suppose.  Reasons I might buy them for my dogs, and reasons I wouldn’t.

The Idea Behind Dog Pajamas.

I’ve been looking into why people get dog pajamas, and many people have stated that they dress them at night to keep them warm.  As most of my followers know, I live in Alaska.  It’s very cold up here and we’ve already had our first snow fall.  The temperatures are starting to get around the 20’s now, so at night, it is cold.

Just like with humans, we often put on fuzzy PJ’s to stay warm at night.  We don’t always sleep in these since many people would most likely get too hot.  However, at night, curled up on the couch and just watching movies, I could see dogs wearing pajamas, like us.

What about in the early morning?  It’s just as cold in the morning for us in Alaska..

Dogs Pajamas In The Morning?

I could see putting my short haired dogs in PJ’s in the morning, honestly.  It gets pretty cold, and I know my dogs don’t want to go out in the snow.  Here’s how my dogs are.  First thing, we wake up and I say, “Good morning Atlas.”  Of course she goes crazy and is so happy to be awake.

She starts to lay on her back demanding belly rubs and lots of licks to go with it.  I know she doesn’t like her morning breath, so she often attempts to lick it out on me.  Yay. After the morning ritual, my dogs jump around to tell me they have to GO.  I throw on my PJ’s and a warm robe.  Slippers on, I put each of the small dogs on the floor (my bed is too high for them to jump down).  Atlas quickly follows.

We head to the back door and I open it up.  As soon as they see the snow, they do a weird back-tracking thing, scooting their little feet and butts back the way they came.  Oh no, you need to go “potty outside.”  This is a basic command I’ve taught them as pups.  They know it well. They don’t want to get cold first thing in the morning. I get that.  I don’t either. I’m dressed to the nines in warm clothes just to walk to my backdoor!

Maybe the PJ’s would keep them warm?

Here’s the deal, these things aren’t exactly thick, they’re thin.  But, first thing in the morning, maybe throwing these on them before they go out would give them a little more warmth.  It’s not a coat and shouldn’t be used in place of that, especially in the extreme cold of Alaska.  But, if I threw this on them to just go out in the back yard quickly, it would probably help a bit.

If I were letting them out longer than the usual 3 minutes it takes them to go, then a coat is necessary.  However, I’ve never seen dogs go to the bathroom so quickly as when winter first hits.  Shoot, my small Chihuahua’s HATE making a path through the snow to get to the ground from the porch.  Buttons usually looks up at me, like, “Are you crazy?  I’m not going through that stuff.  Do you see how small I am?  That snow goes way above my head.  My hoohah touches that!  You don’t go out here naked!  I’m not going, I won’t.  I refuse.”  This is when I get the odd shuffle backwards and her attempt to run.

I always think in my head, there’s no way you’re peeing in my house, you’re going in that snow!  Maybe the extra layer would help her?  You know my take on coats in the cold though, so I’m not sure if the pajamas would do much.  Not only that, I would never let them sleep in them.  Why?

If you dress your dogs up all the time, they’re going to start to get weird patches of fur loss.  Yes, I dress them in coats.  I dress them in vests.  I dress them in sweaters.  You have to up here, it’s freaking cold!  Yesterday, I took Atlas with us everywhere we went.  Just going outside and getting in the truck, she was shivering under her sweater.  I had to add the layer of her vest and she stopped.

I wouldn’t keep them dressed up all day though.  As soon as we get into the house where it’s warm, their clothes come off.  I do those for a couple of reasons.  First, my dogs would get too warm.  Once you’ve been out in the cold and you come inside where it’s warm, you immediately start to sweat.  Dogs are no different.

Secondly, they need to be able to relax and know we’re inside.  My dogs have been trained that once I pull their clothes out, they know we’re going somewhere.  They start to get excited and do this weird paw dance.  Dog’s like to go out, they’re just like us.

Lastly, their skin needs to breath.  Think about this for a moment.  Men that wear socks that go up their calves, they start to lose leg hair.  The socks rub that hair off eventually.  Hats do the same thing with head hair.  Anything rubbing against the hair follicles will start to wear that follicle down and the hair rubs off.

Same with their fur.  It will rub off and be very uncomfortable for the dogs.  They’ll start to scratch at the fur loss and possibly start to get sores.  You don’t want that.  So, giving them breaks between clothing is necessary.  Dress them to go out, and they’ll start to put the two together.  “I’m getting dressed?  Yes, let’s go Mom/Dad!  Let’s go outside!”

I think after this article, I’m not convinced that I would need dogs pajamas.  I could see where they might help in the early morning, or staying warm at night on cold nights.  But, I’m not sure if I could justify spending the money.  In all honesty, I’d rather put them in a bathrobe that’s actually warm.

It’s not only slip on and easy, but it’s made with a thicker material.  Some clothes that have come out for dogs is baffling to me, even though I’m a huge advocate for dog’s clothes.  But I also know that there’s a time and a place for clothing.  I don’t buy anything my dogs don’t need.  Okay, I can’t say that, shucks.  I’ve bought barrettes and bandannas.   Yes, I’ve bought costumes..lots of costumes. I’ve bought Tutus.

Now I’m going to go back on what I just said.  I have bought things that aren’t needed.  But I haven’t convinced myself about the pajamas yet.

What do you think?  Have you bought dog pajamas?  What do you think they’re good for?  How would you convince the rest of us that we need them?  Do your dogs really like them?